Multiplan (MPLN), a company that helps health insurers underpay healthcare provider bills, may have an antitrust issue on its hands, according to experts who reviewed Multiplan practices that came to light during testimony in a recent litigation between a health insurer and emergency medicine staffing company TeamHealth.

When asked for comment, Multiplan did not specifically answer questions related to antitrust risk and simply stated that the company “stands by all of our services, including our Data iSight and Viant pricing methodologies.”

In 2016, when UnitedHealth was in talks with Multiplan about how to best implement Multiplan’s repricing services, Multiplan told UnitedHealth that seven of its top 10 competitors were using Data iSight, a Multiplan pricing database.

The case was filed against UnitedHealth Group, the parent of UnitedHealthcare, the nation’s largest health insurer, by Nevada subsidiaries of TeamHealth, an emergency medicine staffing company who claimed UnitedHealth had been underpaying them for years. A jury in November sided with TeamHealth, awarding the company more than $60 million in punitive damages. Multiplan was not a party to the case; however, testimony about the company’s practices and documents was prominently featured.

A key factor in UnitedHealth’s decision to move forward with Multiplan’s claim repricing tools was hearing from Multiplan that its Data iSight tool “was widely used by our competitors,” UnitedHealth vice president of out of network payment strategy Rebecca Paradise testified during trial.

Another UnitedHealth executive, Scott Ziemer, testified, “This is a space that we were behind some of our largest competitors.”

Multiplan, according to Ziemer, recommended UnitedHealth would be more competitive if it approved a specific price override be programmed into Data iSight so that the prices the database spit out would never exceed a predetermined amount. “The recommendation at that point from Multiplan was to go to 350% [of Medicare’s rates],” testified Ziemer about Multiplan’s specific pricing recommendation.

John Haben, the retired UnitedHealth executive, testified that it was not unusual for White and Multiplan to provide feedback about what others in the market were doing. By reducing United’s out-of-network payment threshold to 350% of Medicare, UnitedHealth knew it would “be in line with another competitor…leading the pack along with another competitor,” according to Haben’s testimony about a 2017 email and presentation he sent to coworkers titled “[Outlier Cost Management]-Multiplan Benchmark Pricing Overview.”

“Today, our major competitors have some sort of outlier cost management; they use Data iSight.  United will be implementing July 1, 2017,” the attorney for UnitedHealth read from the email and presentation on the ninth day of the trial. “We want to get together with Dale [White] from Multiplan this morning…to discuss potential opportunity to improve outlier cost management by $900 million,” according to the discussion about the email during Haben’s testimony. Haben’s documents detailed several Multiplan services that UnitedHealth would be utilizing to ensure payment would not exceed 350% of Medicare rates.

UnitedHealth chose to start with a less aggressive approach when it onboarded with Data iSight, one that would put United in the “middle of the pack of its peers,” but over time lowered the override to further reduce provider payments, according to Haben’s testimony.

Multiplan vice president of health care economics Sean Crandell testified during the UnitedHealth trial that “all of the top 10 insurers in the U.S.” are among Multiplan’s clients.

Testimony during the trial also revealed that Multiplan hosted annual Client Advisory Board meetings where executives of competing health insurance companies gathered to discuss their successes with using Multiplan.

Antitrust concerns often emerge when companies work together, or through a middleman, to illegally drive prices up or down, according to antitrust law experts who spoke to The Capitol Forum.

To be sure, there is a legitimate scope for competing firms to exchange information that will help them be more effective competitors and better informed about the market, Doug Melamed, an antitrust law professor at Stanford University, told The Capitol Forum. But antitrust issues arise, he said, when those communications cross the line from a reasonable exchange among competitors to communication that looks designed help them behave in a very uniform way on the specifics of their terms of trade.

Cleveland State University antitrust law professor Christopher Sagers told The Capitol Forum that if Multiplan collected competitively sensitive information from some insurers and shared it with others, the company could face antitrust liability in two different ways.

A hub-and-spoke conspiracy problem arises, said Melamed, when the hub provides assurances to one firm that an aggressive pricing strategy is being adopted by one or more competitors of that firm to “provide mutual comfort that the aggressive pricing would not be a competitive disadvantage.”

“Smoking gun evidence of a hub and spoke conspiracy would show hub going back and forth between horizontal defendants saying, ‘You should change your price because your competitor is charging XYZ,’” Sagers said.

“If you can establish a practice of that behavior, it would be a pretty solid case for hub-and-spoke conspiracy, especially if you can show that there’s a pattern of behavior like that amongst all the defendants and the prices stabilized over time, or the prices on average significantly went down over time. Then you’ve got a really solid case,” he said.

“You are not supposed to be able to do that in competitive markets,” said Sagers.

Courts have said information sharing among competitors that has the effect of lowering prices is illegal, even if the lowered prices are not identical, especially if the industry is a highly concentrated one with significant barriers to entry and prone to follow-the-leader, or “oligopoly,” behavior, Sagers explained. These cases “often involved some trade association or coordinator that collects all the information and then distributes it to all members with forward-looking predictions or advice about what prices to charge,” added Sagers.

Multiplan consults closely with health insurers on how to set prices, and careful antitrust mitigation policies would likely involve firewalls and compliance policies to ensure that information obtained from one insurer did not play a role in consulting on price with another.

Multiplan’s conduct could be problematic because the company actually markets its services, and the customers’ experience using them, as a way to match competitors on setting prices and, ultimately, reducing costs. In this sense, a typical sales pitch like “all your competitors are doing it,” could become much more problematic because the service itself is a price setting tool that retains an awareness of rivals’ pricing.

When Multiplan engages in consulting services on setting the price, the trial testimony indicates that it lets customers know where they are compared to their competitors. Haben in his testimony said that UnitedHealth was using Data iSight initially to be in the “middle of the pack of its peers,” but over time lowered the override to further reduce provider payments. That could show an ongoing knowledge of competitor behavior and an ability for Multiplan and its insurer customers to set prices relative to peers on an ongoing basis.

Since at least 2015, Multiplan senior sales executives have hosted Client Advisory Board (CAB) meetings attended by executives of competing insurance companies. Multiplan invited active and prospective clients to CAB meetings held at luxury spa resorts such as the Montage Laguna Beach, according to sources who spoke with The Capitol Forum.

Paradise, the UnitedHealth vice president of out of network payment strategy, testified about the CAB meetings saying, “Typically they talk about things they’ve implemented, other things they’re looking at, providing other industry new information.”

She described a slide that was part of a Multiplan PowerPoint presentation White gave at the 2019 meeting. According to a discussion between Paradise and an attorney representing UnitedHealth, the slide showcased years’ worth of medical costs and the medical cost reduction Multiplan achieved for insurers. Multiplan’s services, The Capitol Forum found, include allowing insurers to set their own “meet or beat” prices and slashing certain treatment codes off of medical claims before pricing the claim, a process Multiplan refers to as payment integrity edits to claim in SEC filings.

To promote Data iSight at CAB meetings, Multiplan sat prospective clients together with active clients as a sales strategy, according to a 2017 Multiplan document reviewed by The Capitol Forum that discussed a CAB meeting that had taken place two years prior. 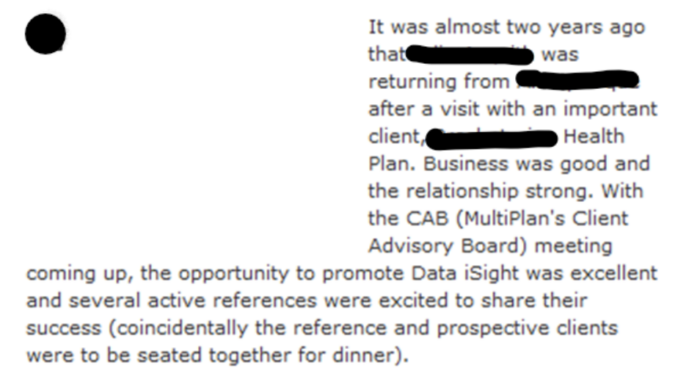 Health insurers UnitedHealth, Aetna, Cigna, Anthem (ANTM), Centene subsidiary Wellcare (CNC), and Humana did not respond to a request for comment for this story.

“If what they are talking about at these meetings is a very specific current terms of trade,” said Melamed, like “’Here’s how we can get providers to take our prices,’ or ‘Here’s what we are going to pay for certain kinds of services,’ then that gets out of the area of generally making the various firms more knowledgeable and sophisticated about the market and gets into the area of enabling them to agree on specific terms of trade.”

The goal of Multiplan’s client advisory board meetings was specifically to have clients discuss their experiences with a product that allows them to remove billing codes and set prices. That involves consulting with Multiplan in an ongoing way about competitors’ pricing. If Multiplan and its customers discussed specifics about how they were using Data iSight to set prices—ostensibly the biggest benefit of the service—it would likely be problematic from an antitrust perspective.